The Square is a 2013 Egyptian-American documentary film by Jehane Noujaim, which depicts the ongoing Egyptian Crisis until 2013, starting with the Egyptian Revolution of 2011 at Tahrir Square. 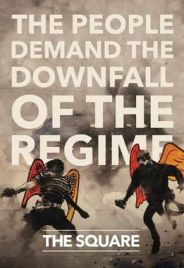 The biased nature of mass media is not something unheard of in our modern times, especially when considering the pivotal role that they play in the public sphere.
The primary role of mass media is to provide a space where different perspectives and issues are raised in order to shape decision-making processes according to the people’s will. In essence, one could argue, it can function as the foundation of an effective democratic society.

In authoritarian regimes such as the one portrayed in The Square (2013), non-conforming ideologies are often overpowered and excluded from the public sphere, resulting in a dishonest and corrupt use of mass media. Of course this is also true in different degrees for other political systems throughout the globe, but in light of the ‘Arab Spring’ and particularly the Egyptian Revolution, it becomes evident how regimes consciously and actively manipulate mass media to defend and benefit the establishment in power.

As Khalid Abdalla says (01:13:00), “only we can tell our stories”. It is up to the subjugated people to expose the origin and the extent of the cruelties that Egyptians have faced under Mubarak’s regime for the better part of thirty years. To some extent, with the introduction of information and communication technologies, people are able to bypass the government and not only raise awareness within Egypt itself, but also present the reality of the facts to the rest of the world.

The internet and its particular features of de-central organisation, interactivity and interconnectivity to other media genres have opened up new spaces for social and political actors to get attention. The opportunity to collectively rise against injustice has been somewhat facilitated in the digital era. Therefore, in a climate of political suppression, severe inequality, and general dissatisfaction, the use of these technologies are an opportunity for revolutionaries to find unity and to have an unfiltered voice of their own.
As both Khalid and Ahmed Hassan declare (29:00), it is up to the digital guerrillas to use militant filmmaking to expose the truth that has defined animated the revolution.

But a question that emerges when considering this new form of revolutionary practice, is why doesn’t the Egyptian government ban or restrict access to the websites that enable such forms of militancy, in the same way for example the Chinese government does?